HomeWho We AreOur History
A- A A+ 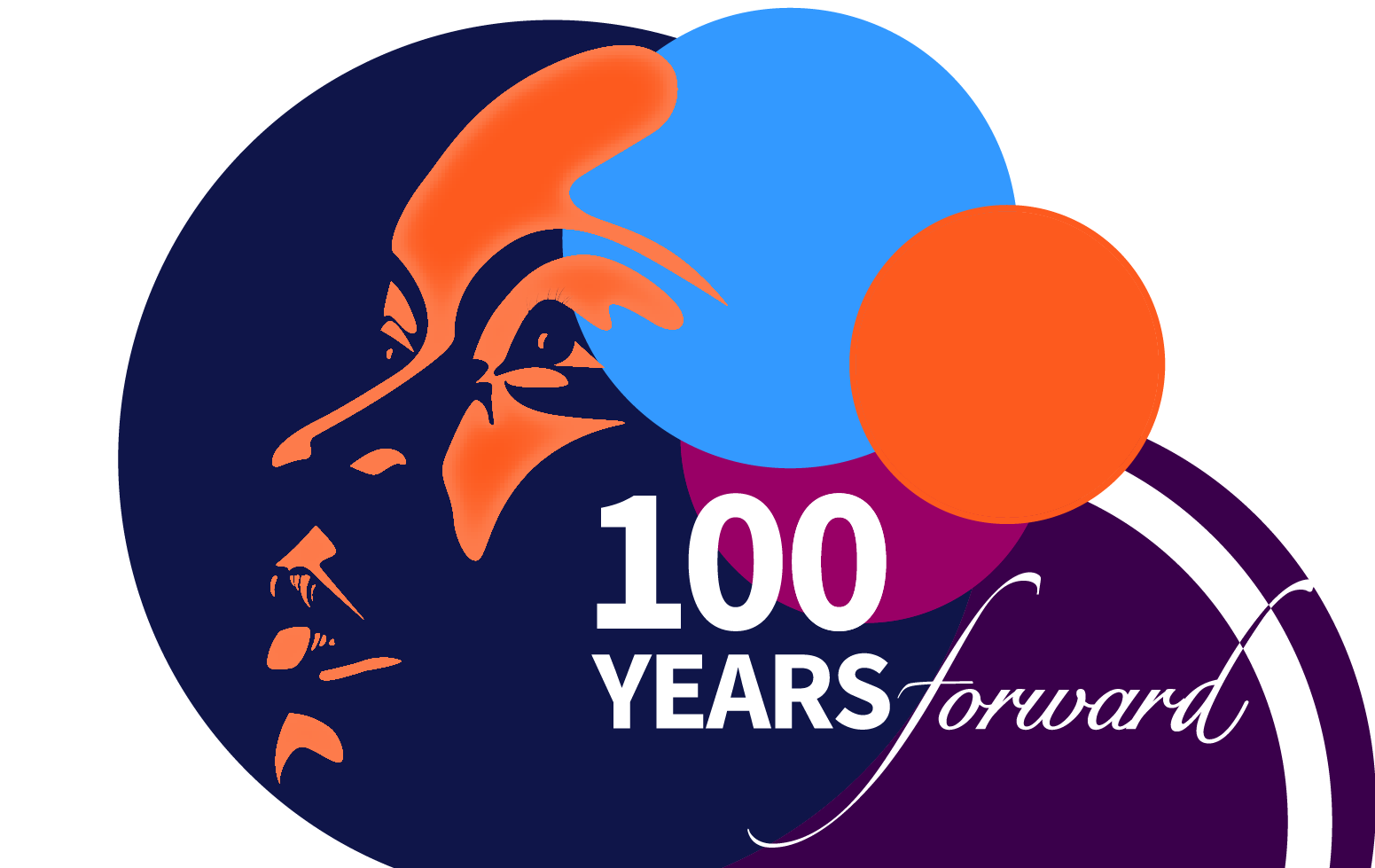 In 1920, Mary Glenn Jackson, wife of Dr. James M. Jackson, founder of Jackson Memorial Hospital, led a small group of women to start YWCA of Greater Miami-Dade, Inc. With only $2,000, Mrs. Jackson and the women believed in the strength of women and their innate ability to impact the lives of their family and community. They believed convening and collaborating together gave women a more powerful voice.

For more than 100 years, YWCA has been at the forefront of the most critical social movements, offering life-changing services, supports and advocacy across Greater Miami-Dade. In 2020, we happily announced that our organization had changed our name to YWCA South Florida. This new name signifies our commitment to the South Florida region with the expansion of our programming and services to Broward County.

We have been disrupting systems of social injustices by:

YWCA South Florida Over The Years 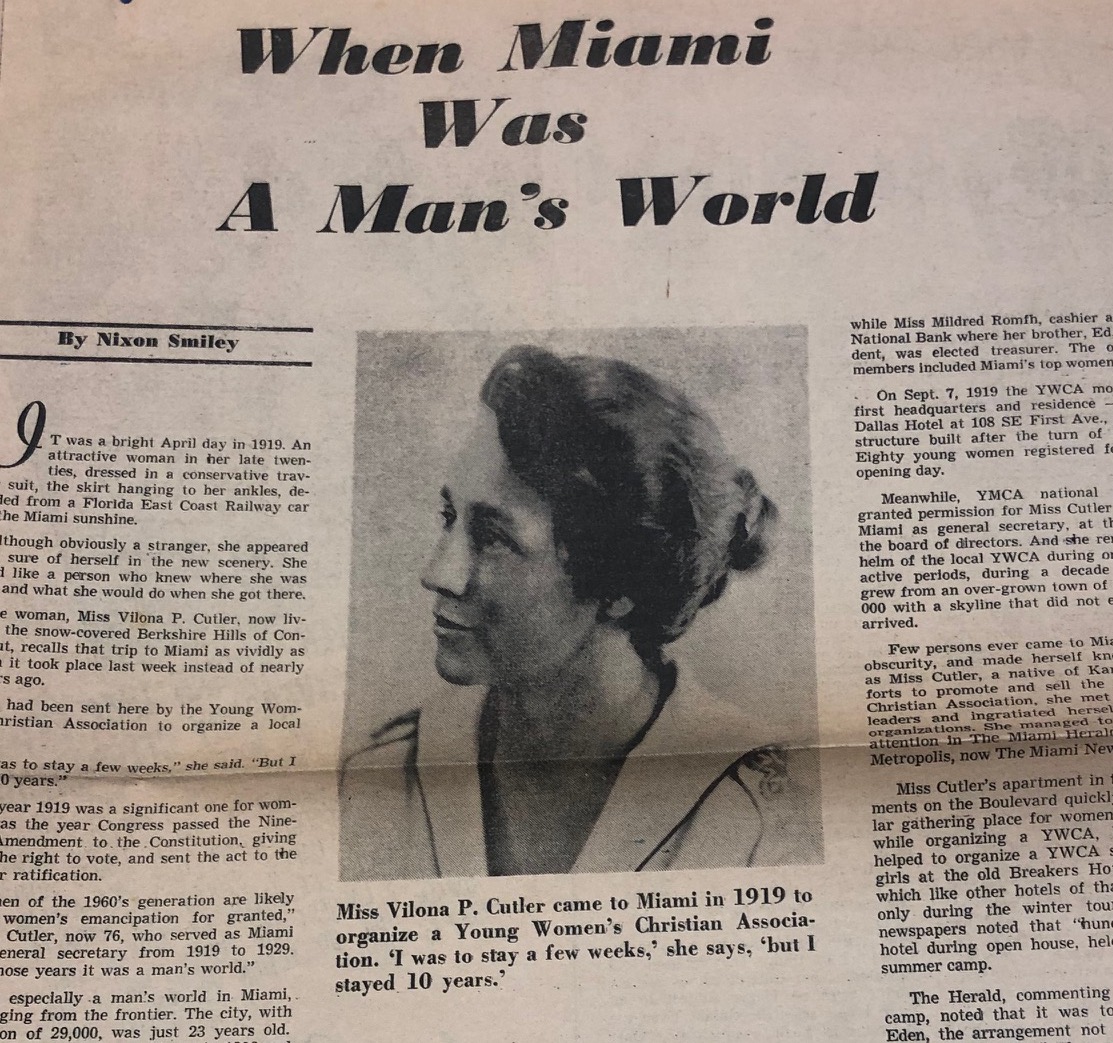 Miami, a city just over 20 years old with a population of 29,000 is considered a “man’s town” when Ms. Vilona Cutler visits on behalf of the national YWCA to establish a chapter in Miami. She quickly made a name for herself, and what was supposed to be a weeks-long visit, turned into a decade of service to the women of Miami. 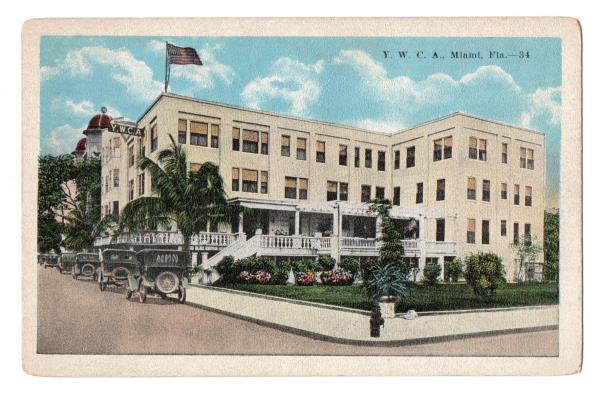 The Fort Dallas Hotel serves as the first home to YWCA Miami, with Mrs. Mary Glenn Jackson (wife of Dr. James M. Jackson, for whom Jackson Memorial Hospital is named) serving as our organization’s first President.

During a time when a woman’s right to vote has only just been established, and WWI is only just ending,  our founding members work to strategically organize and empower women in the Miami community.

Early in its inception, YWCA Miami served as a home and have to women who went against social traditions. 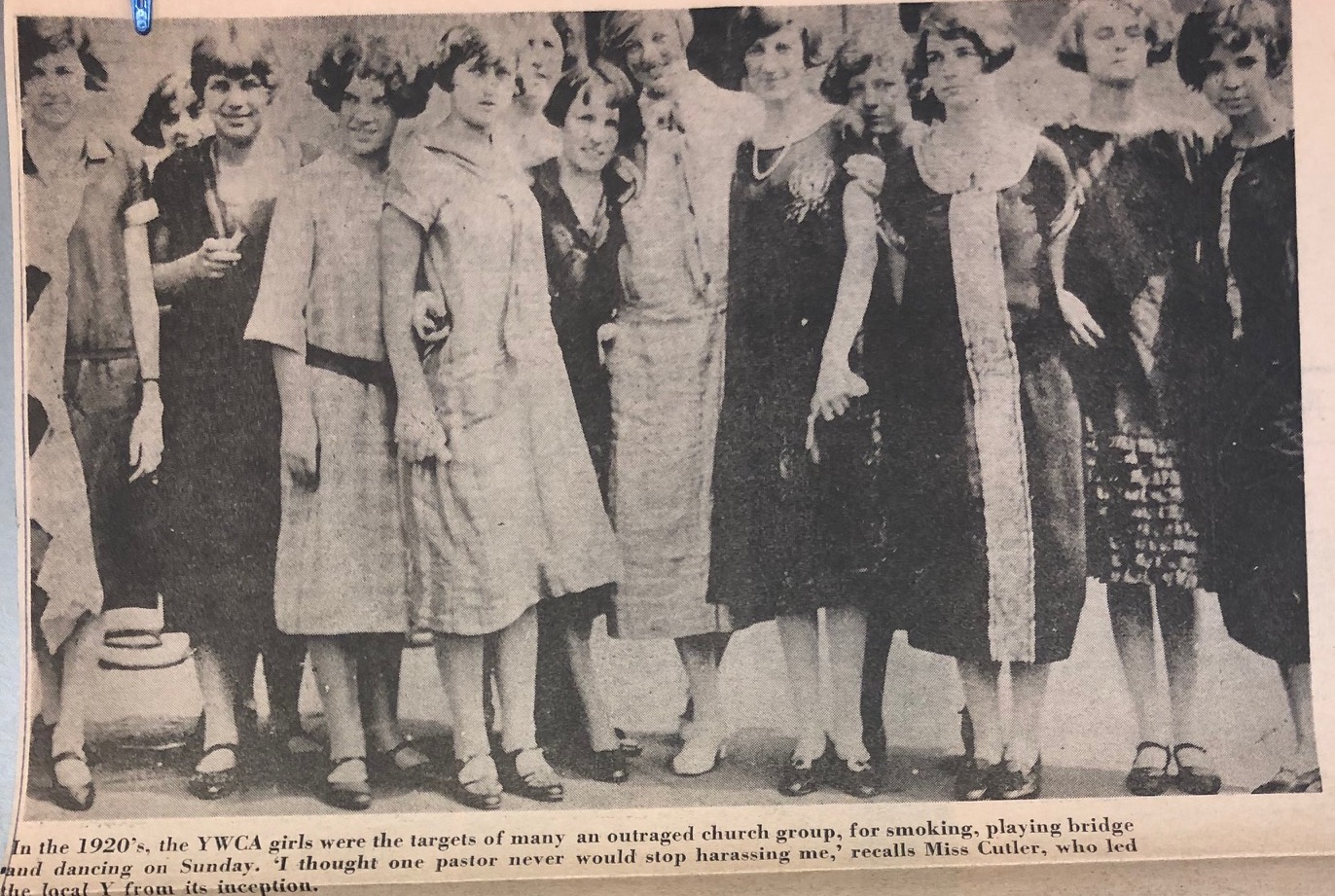 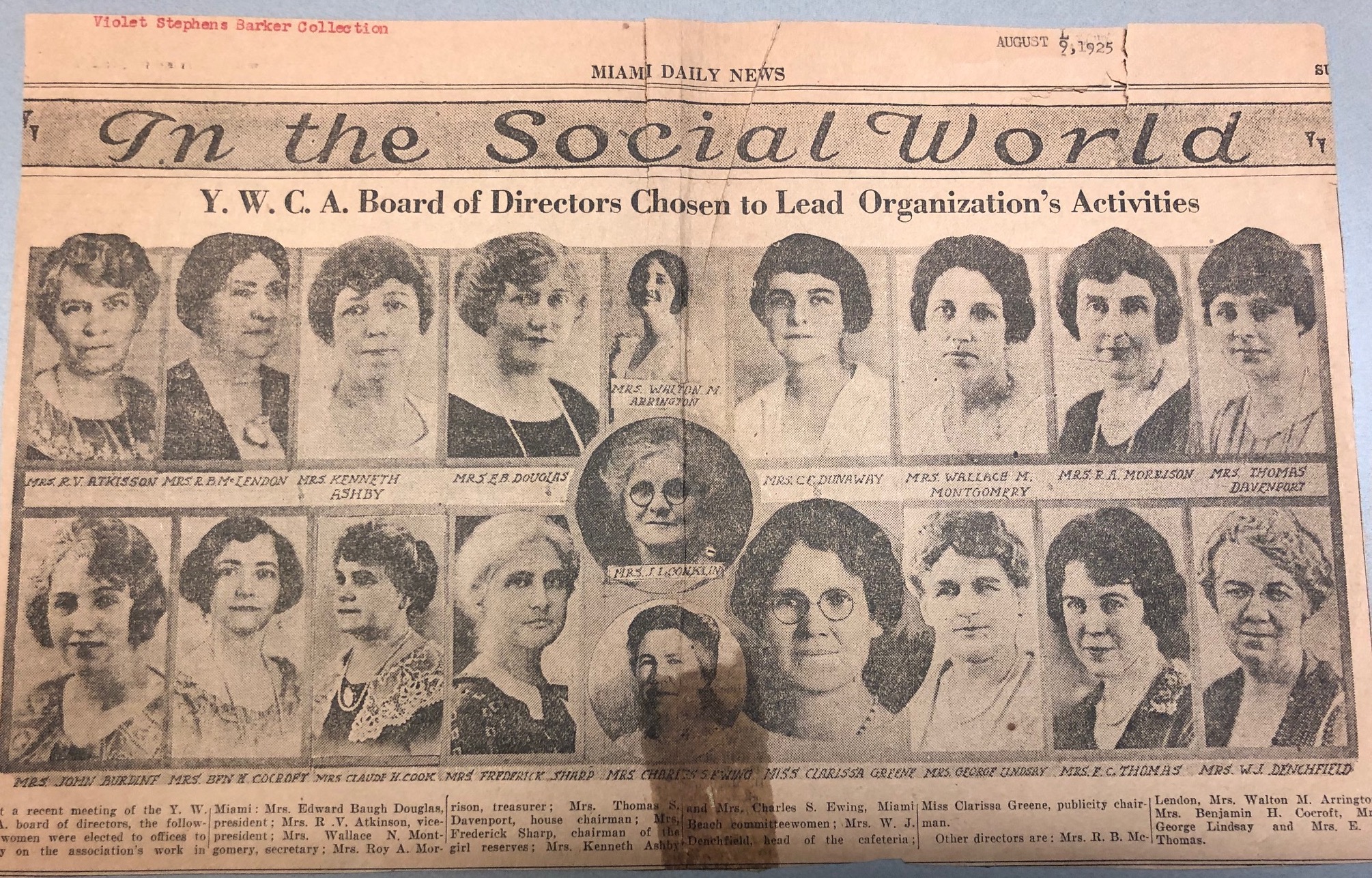 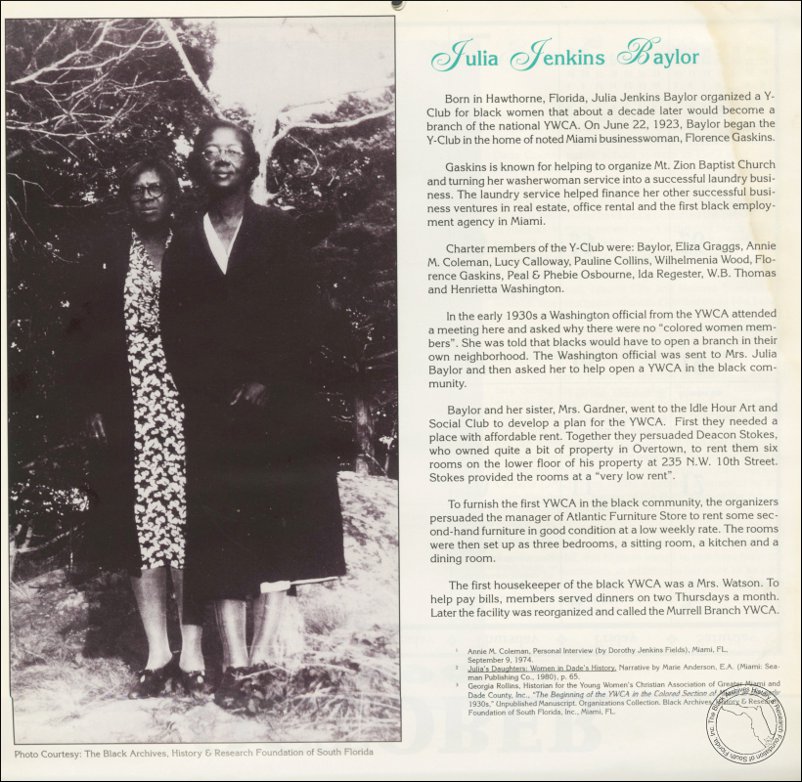 Like many cities in the southern United States, Miami followed segregation and Jim Crow laws, leading to the establishment of a separate YWCA (known then as the “Y-Club”). This branch, later known as the Murrell branch, is established by Mrs. Julia Baylor Jenkins. The first home of this branch is located at the residence of noted businesswoman Florence Gaskins, who is known for establishing the first black employment agency in Miami. 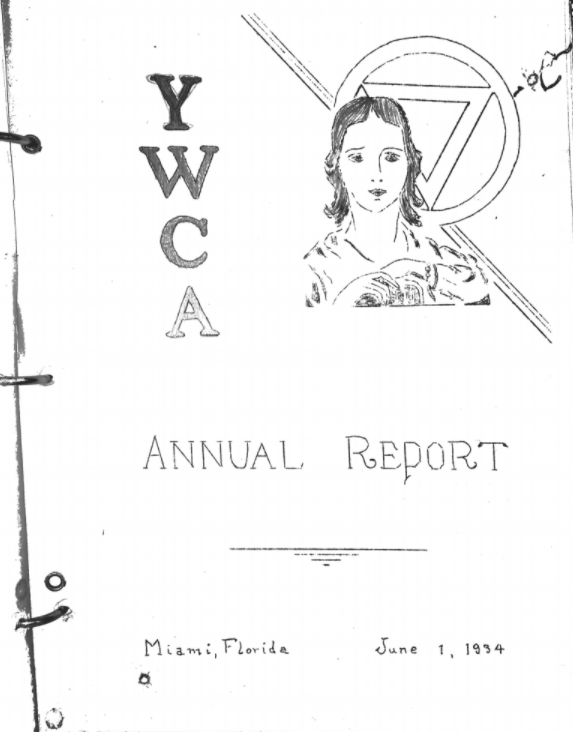 During this time, the YWCA Miami’s impact reaches more than 76,000 women through the YWCA Residence, social clubs, and groups. The YWCA Residence serves as a home for young businesswomen who are new to Miami and seeking a supportive and safe environment in which to establish themselves.

The saying goes “a girl does not merely room in the Residents. She lives there.”

The Business Girls Club, whose motto is “Living Courageously,” hosts weekly meetings where they speak about international relations, travel, psychology, and music. They emphasize Leadership Development and send members of the club to the YWCA national convention, where they work to more closely align with the national movement.

YWCA Miami elevates our organizational commitment to racial equality by welcoming our first Black woman to the Board of Directors. There is also the employment of 2 Black women as “professional staff,” and 1 Black woman as “clerical” staff.

Members from the Murrell Branch petition for adequate housing and recreational facilities.  This request is met with immediate attention and given a high priority.

Local YWCA members (of both chapters) consistently advocate for the rights of Blacks to have access to countertop seating, bathroom facilities, first-class train tickets, etc.

YWCA Miami’s Public Affairs and Interracial Committees work with UM Human Relations Dept. to review and assess public attitudes around restroom facilities for Blacks shopping in Downtown Miami.   This is a particular highlight for our organization during this time, as assessing the local attitudes about race becomes critical in our strategy moving forward to promote racial equality.

Gladys Panton becomes Executive Director, “I’ve met so many people who’ve told me, ‘if it wasn’t for The Y, I’d have starved to death.’”

As YWCA Miami seeks to expand our reach and impact across Miami to women with jobs, women who have been ostracized for their profession, or women who have simply fallen on hard times, we begin fundraising for a new, larger facility.

Spearheading a movement for federated funding of social agencies, YWCA Miami worked to develop the first Community Chest and support the development of the local United Fund.

Under Panton’s leadership, the YWCA Miami is open to housing all people of color.

YWCA Miami’s Board becomes “fully integrated.” With members who are Jewish, Black, Catholic, and Hispanic. 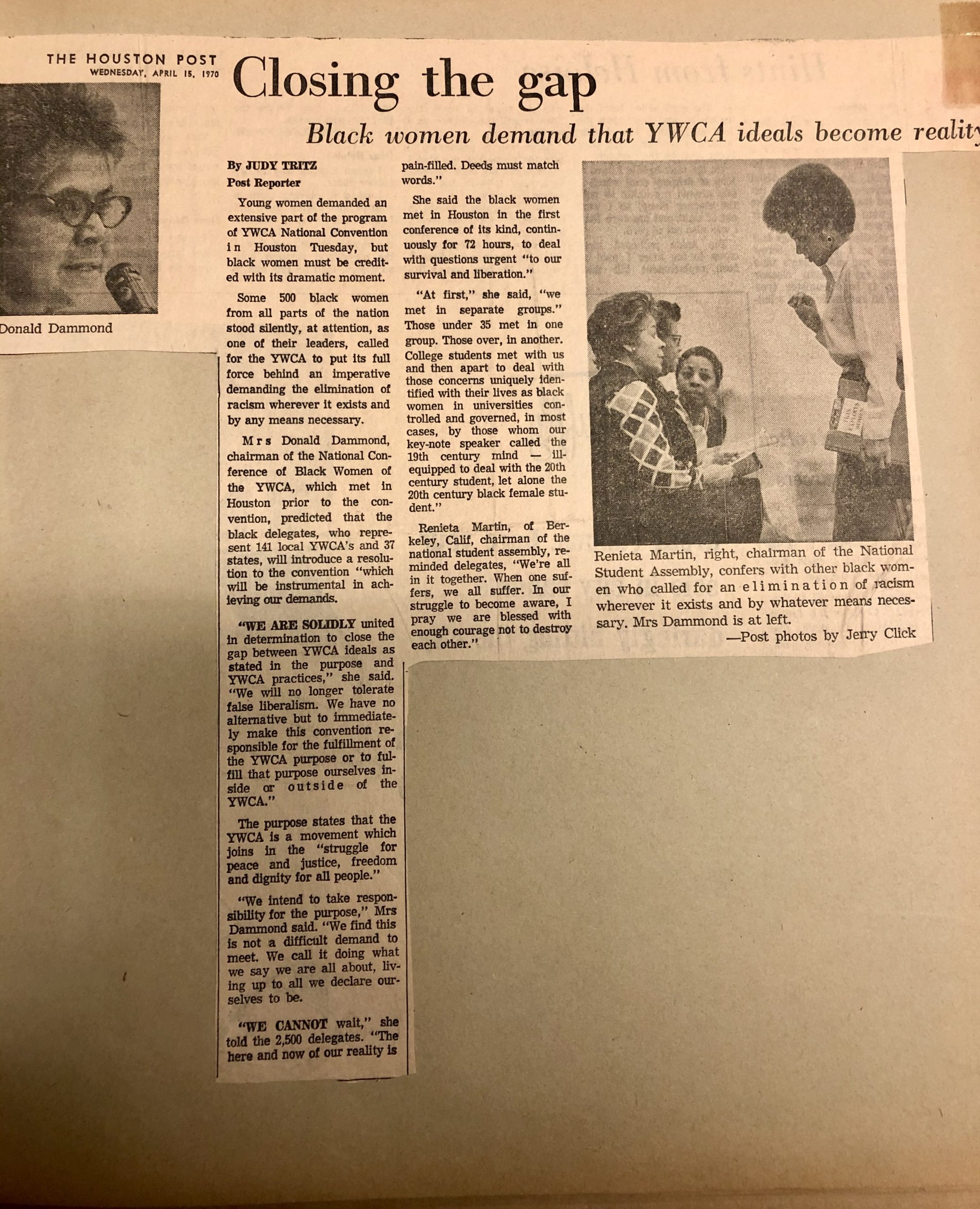 Ms. Mina Holden, sociologist, becomes Executive Director of YWCA Miami and affirms the elimination of racism as a priority, with a commitment to “raise the consciousness of white people” under her leadership.

YWCA Miami Leadership and Board fight for mortgage assistance of their 15-story facility that provides housing for local women in need. 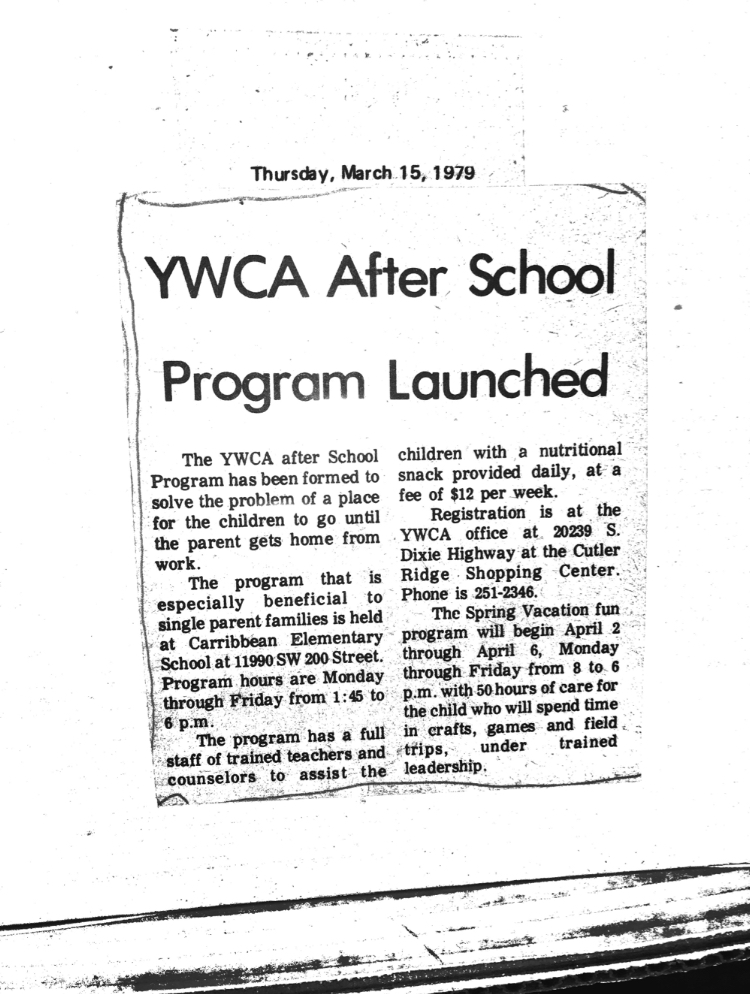 YWCA Miami launches an Afterschool Program.  Our organization also begins to expand our support of mothers throughout the 1980s and beyond by opening a series of childcare and learning centers.

YWCA begins to open a series of child care centers, as the organization works to expand services for working women and families in need of support and childcare.

As YWCA’s childcare centers open across Miami-Dade County, the organization continues to deepen its impact on the women and children of South Florida.

Metropolitan Dade County Board of County Commissioners approved 30-year lease with two ten-year renewals with the YWCA for .94 acres of land at 351 NW 5th Street for construction of a headquarters building.

Hurricane Andrew hits South Florida and is considered to be the worst storm to hit the area since 1935. After the storm, more than 60,000 homes were destroyed, leaving over 175,000 South Florida residents homeless. Answering the need, the YWCA provides childcare for displaced families following the storm in a tent city setting.

Later this year, we broke ground on a new construction, for what would become our South Florida Headquarters-the Marta Weeks Sutton Women’s Center. 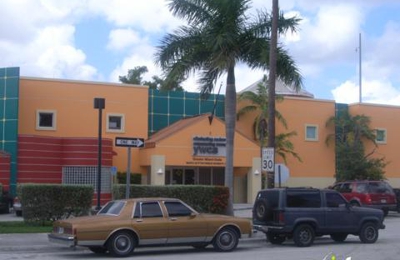 Our staff moves into The Marta Sutton Weeks Women’s Center after our Board of Directors approves a construction contract for the construction of the 27,821 square foot building with C.G. Chase Construction Company.

Beverly Phillips, Executive Director, retires from the YWCA after 22 years of service and the selection of her successor Eileen Maloney-Simon.

In 1992 following Hurricane Andrew, then YWCA President Marlene Williams found out that her dear friend had been diagnosed with breast cancer.  Even in all of the chaos following the hurricane, Marlene vowed to do everything she could to help her friend.

“With the support of Board Vice President Ann Machado, Executive Director Eileen Maloney-Simon and the rest of the Board, the long journey paid off. In May 1996 the inaugural Race was held at Bayfront Park in Miami, kicked off by Former Miami Dolphins Head Coach Don Shula, whose first wife Dorothy had died of breast cancer in 1991.”–Excerpt from History of Miami/Ft. Lauderdale SGK Race for the Cure
1997
more

YWCA wins a three-year grant through Success by 6 establishing the Neighborhood Family Center (NFC) in Overtown at the headquarters building, with United Way and Royal Caribbean Cruise Lines as partners. The NFC incorporated a holistic approach to serving families. This partnership continued for nine years and served 800 families in Overtown each year.

YWCA raises $550,000.00 (from Board of Directors, Health Foundation of South Florida, and Rosie O’Donnell’s For All Kids Foundation) to lease a small childcare center from Miami-Dade Housing to renovate and begin providing infant and toddler care for the community on the northern end of Miami-Dade County.

Later in the year, Royal Caribbean Cruise Lines transforms the YWCA Weeks Meeting Room into a theater with a drop-down screen and surround sound for Saturday Matinee.

In partnership with the 11th Judicial Circuit and the Court Administrators office, the YWCA establishes the first “Court Care – A Better Place to Be” center in the Lawson Courthouse. The center provides a temporary respite for children ages 0 – 12 years old, who come to court due to lack of child care alternatives for adults/children being witnesses or unintended victims of domestic violence, or involved in family disputes.

YWCA continues to elevate our commitment to supporting women and children throughout South Florida by opening a childcare center at the Jubilee Housing development in Naranja (located at the southern end of Miami-Dade County).

Later in the year, the Windows to Early Learning center opens, and the YWCA purchases 12.1 acres of property in Miami Gardens for $410,000. The purchase includes the site of the Windows center, the adjacent building, and two acres west of NW 37th Avenue.

YWCA partners with the Trust for Public Lands to open the first public park in Overtown in over a decade. The neighborhood serves as a home to many underserved youth who will benefit from the presence of the structure. The YWCA continues to maintain the park, located adjacent to the Weeks building on NW 4th Avenue. The park is open 7 days a week until sundown.

This is a big year of recognition and growth for YWCA, as our organization receives the Thelma Gibson Award of Excellence. The award honors an individual and a corporation that excels in promoting leadership, excellence, and business development among corporate and professional women from the Miami-Dade Women’s Chamber of Commerce.

After receiving such a high honor, we open the second “Court Care-A Better Place to Be” opens at the Richard E. Gerstein Criminal Courts serving children ages 0 to 5, thus expanding the childcare services we can offer for South Florida families navigating the court system. 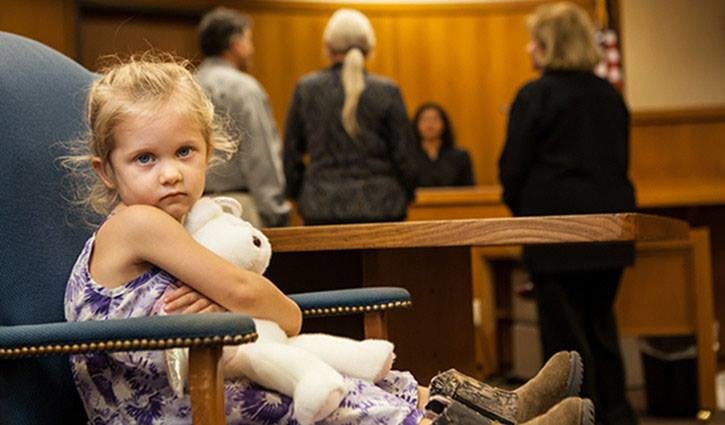 In 2011, the third “Court Care – Better Place to Be” opens supporting the Child Support Enforcement Court. The county fully funds all three Court Care Centers! 11th Judicial Circuit is the only circuit to have these programs.

YWCA begins the Headstart/Early Headstart Program and takes over the operation of the Colonel Zubkoff Headstart Center in Miami Gardens. We are awarded 212 Early Headstart/Headstart slots at this time. 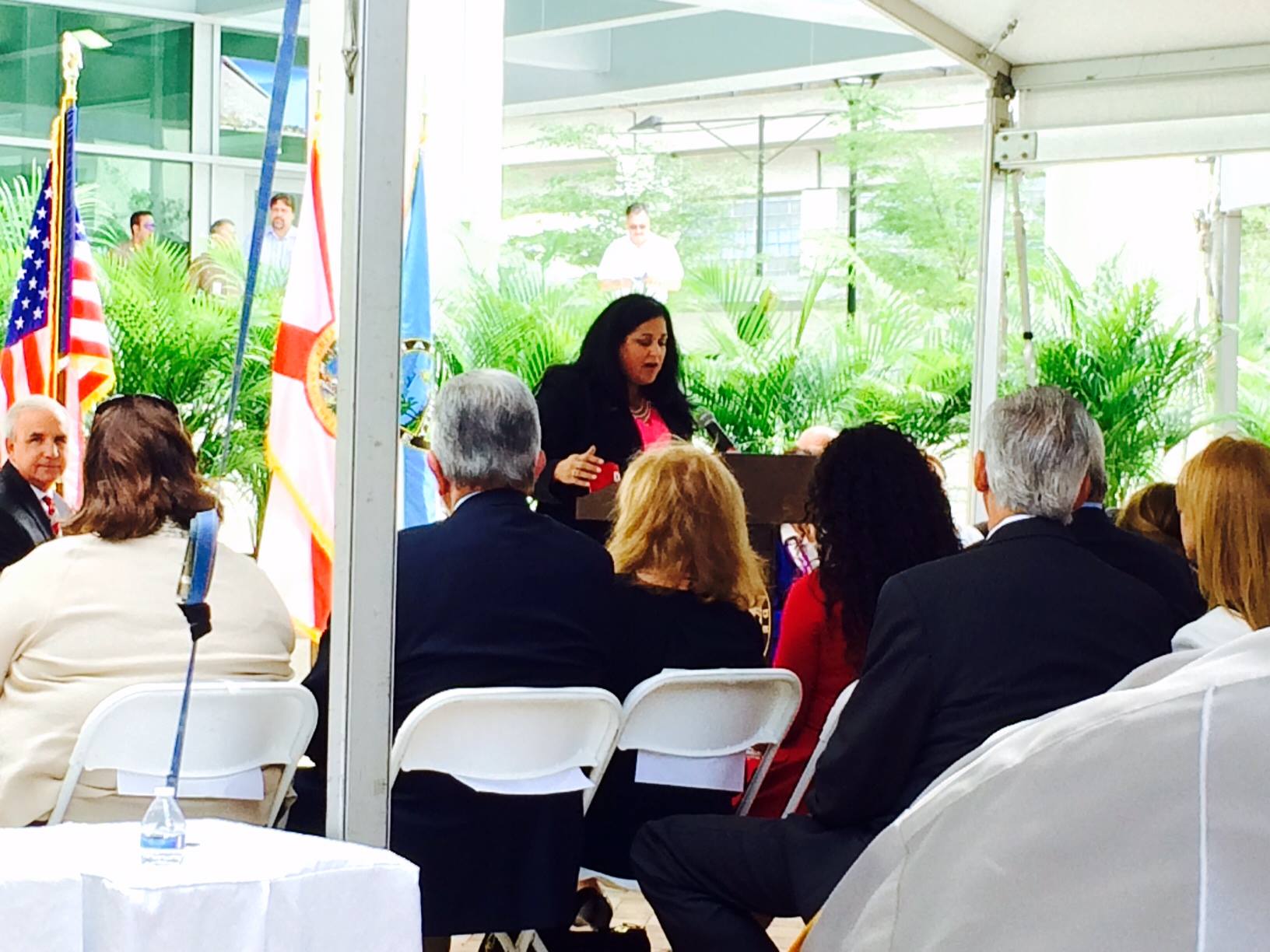 Grand Opening Ceremony for the Miami-Dade Children’s Courthouse. This celebration is very important to the YWCA as it marks the 4th location for our Court Care services.

YWCA’s new state-of-the-art Intergenerational Center in Miami Gardens officially opens! The center aims to continue continuing our mission of empowering women and eliminating racism throughout Miami-Dade County and serves as a safe and fun place for families from the community to gather, learn and connect. 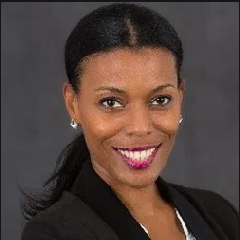 Later in the year, YWCA Board appoints Kerry-Ann Royes as its new CEO. Royes is the first Black woman to lead the organization in its 98-year history. The search committee, comprised of YWCA Board of Directors and community leaders, is excited to bring Royes’ multi-sector experience to the organization as we prepare to celebrate a 100 year milestone. 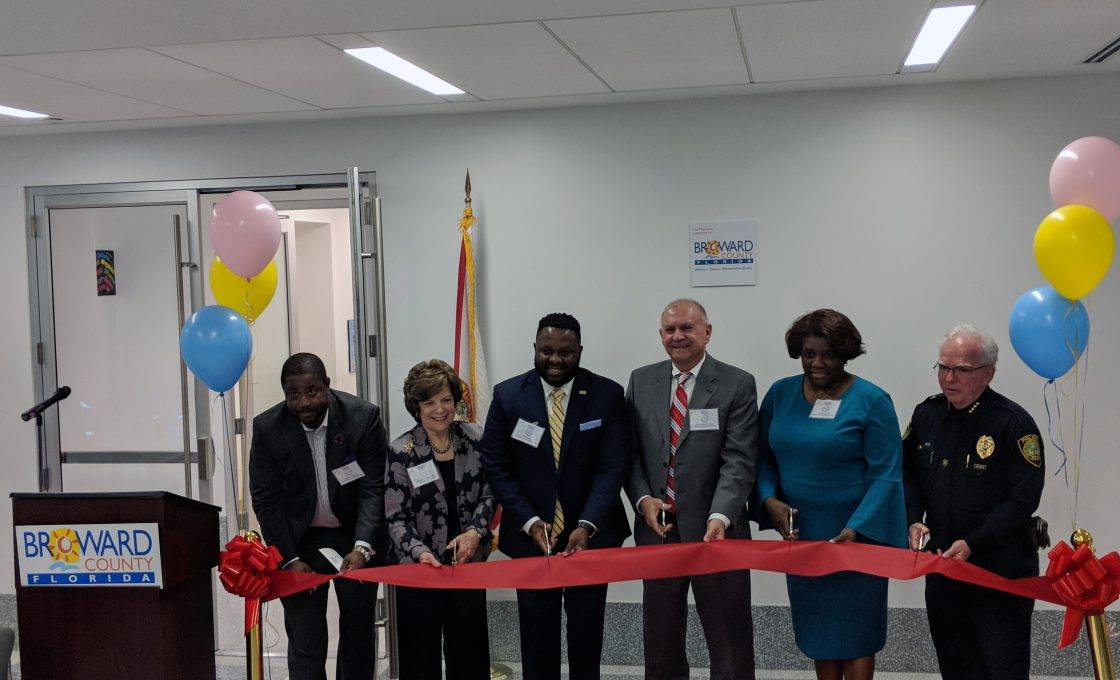 YWCA in partnership with the Central Courthouse expands the Courtcare program into Broward County, with the addition of Broward County Kidspace, a secure, nurturing environment with trained, qualified YWCA staff to supervise children ages 6 months – 13 years while their parent/legal guardian attend a domestic violence-related court proceeding or filing.

In celebration of 100 years of service to the Miami-Dade community, YWCA of Greater Miami-Dade, Inc. renames the organization YWCA South Florida.  This name change fully celebrates and encompasses the expansion of our services not just in Miami-Dade County, but reaching beyond to provide support and inspire change to residents living throughout South Florida.

To commemorate this milestone, and in response to the year’s Covid19 pandemic and mass civil unrest around racial equity, we amplify our voice as a resource for families, BIPOC individuals, and allies seeking to eliminate racism and empower women.

In partnership with a Black-woman owned marketing agency, we develop the tagline “100 Years Forward,” as a rallying cry across our organization. For 100 years we have worked to break down barriers across the intersection of gender and race, and for as long as inequities exist, we will push forward.